This summer I wrote a preface to the Chinese translation of The Hypothetical Mandarin. I figure it will never see the light in English unless I put it online, so I’m putting it here. One thing I noticed is that beginning with the second paragraph my sentences begin to reflect an awareness that my translator is going to have to get them into Chinese. I also am more candid than I usually am about what I was trying to do in the book. 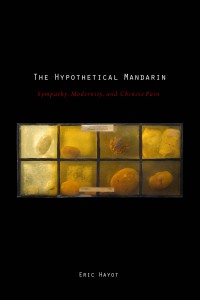 The translation of one’s work is an opportunity to think about the activity of one’s own writing practice, to face up to the particularities of one’s style and to acknowledge, or feel apologetic for, the difficulty of one’s prose. Somehow the task of translating work into another language—in which one confronts the fact that one’s work has created difficult labor for someone else—clarifies the value of the choices one makes.

At first therefore I am tempted to apologize, both to the reader, and to the translator, Yuan Jian, for the unusual and perhaps difficult style of this book. But, perhaps because I am an unusual and difficult person, I have decided that apologizing would be a mistake. After all, the book was intended to be unusual in English as well. I do not want to write like anyone else. Indeed, part of my goal as a writer is to write in a prose style that has an active force in the work, that makes readers aware not only of a personality behind the writing and argument, but makes them wonder if in fact the argument might also be happening at the level of style itself.

Literary scholars take the idea that the argument of a work might happen in its style as a perfectly normal aspect of their work. I cannot imagine anyone disagreeing that the prose style of Jorge Luis Borges or Lu Xun or whoever has something to do with the content of the fiction or the essays they write. The same is true for literary criticism: no one will argue that Derrida’s prose style has nothing to do with his ideas.

Why then do most critics write as if their style had nothing to do with their ideas? Perhaps they are not ambitious enough. Perhaps they do not think of themselves as artists. I am not sure I am an artist, but I know that it is important to me to try to act like one. This means taking myself seriously—not because I am sure that my work is, finally, serious, but because I am sure that the ethical practice of writing begins with believing that writing can matter, that writing is itself a form of thought.

That is why I am especially grateful to Yuan Jian for all his work. As far as I can tell (my reading ability in Chinese is not very good, but I had a friend read me some of the work aloud, too) he has done a remarkable job capturing the feel of my writing in Chinese. If it sounds foreign to you, dear reader, do not worry—it is supposed to sound foreign, sometimes, to native speakers of English. Things that never sound foreign run the risk of being too familiar. They will therefore fail to break the habits, the common sense, of the reader’s eye and ear. But scholarship, like the work of art, should have as its most basic goals to break the habits and defeat the common sense of its audience.

I wrote the book partly to undermine the habit that Europeans and Americans have of thinking that the origin of their most important philosophical concepts lies entirely inside the national and cultural boundaries of the West. I show here that in the case of the development of sympathy, such an idea is simply untrue. I also show how the idea of China helped Europe “think” through and understand a variety of important ideas about modern life, including concepts of world history, religious syncretism, the relation between state and personal cruelty, between science and primitivism, and between the body and the self. In each of these cases the history of a European or American concept can be shown to rely on a certain version of China that did important cultural and philosophical work. This book is a history of that labor.

A certain version of China, yes. But not a version in relation to some true or actual China to which we should return. There is no real China. There are only ideas of China. Chinese people also have those ideas, which we can easily see if we compare some of the common ways in which we describe the language Americans call “mandarin Chinese”: 普通话，汉语，国语，中文. The first of these relates universality to the nation ; the second describes an ethnic principle; the third a Taiwanese resistance, via ambiguity (which 国?), to the mainland; the fourth a tribute to the classical conception of Chinese centrality. None of these names the actual or real Chinese language; each of them expresses an idea of that language. Which one we choose depends on what we want to do. This use reflects competing notions of Chineseness, both in greater China and abroad. We need more work that would help us understand how the ideas of China work.

END_OF_DOCUMENT_TOKEN_TO_BE_REPLACED

I demand that the Printculture community weigh in on the matter. I have become dissatisfied with the structure/updatability of the Penn State pages, and am thinking about creating a set of professional pages using WordPress, which would allow me easily to update announcements about talks, books, and so on, while still also creating a structure for my syllabi, writing tips, and so on.

The free option is something like ehayot.wordpress.com, but unfortunately that keeps you from changing the design too much. The cheap option is to buy (for $12) erichayot.org, and host the site here on the Printculture servers (which any of the regulars could do if they wanted with their own names, btw).

But I’ve always been a little wary of the www.myname.org thing; it feels a bit self-aggrandizing. If it’s the only way to have an easily updatable and good-looking website, I may just do it anyway.

So, reading around the internets today with the new PC 2.0 on the membrane, it occurred to me (as I passed through Kevin Drum, Andrew Sullivan, Balloon Juice, and the other usual suspects) that to be a professional blogger today you basically have to be willing to say almost exactly the same thing as everyone else for some significant percentage of the time. And then for some of the time you have to say something different, or say something about different things. And the reason people read your blog is because, (a) they know they’re going to get comments on the big issues of the day (in politics, today, the Pennsylvania Voter ID decision), and (b) they will also get some other stuff that is unique to you, more or less.

I don’t think it was like this years ago. That is, I feel like there was much more differentiation among bloggers of a certain type (politics) than there is now, and that one of the effects of the professionalization of blogging has been to push everyone towards more similar content, with minor differences that in the long run don’t amount to too much.

On that same subject this Rohin Dahr piece on the mattress industry is getting a lot of play. Here’s the block quote featured by both Drum and Sullivan:

The top four companies (Sealy, Serta, Simmons, and Tempur-Pedic) make up 59% of the industry revenue. The top fifteen mattress companies make up a whopping 81% of the market. Low levels of competition lead to consumers paying obscenely high prices for mattresses.

As Drum points out, this structure doesn’t seem that surprising in a mature industry. Perhaps that’s why blogging is starting to look like it.

For PC 2.0 I thought it might be nice to repost a few things from the archive, a way of remembering where we came from. Today’s reprint is my first post for Printculture, dated Dec. 9, 2004:

I came across the following in a book of interviews with Michel Foucault this morning:

It is the task of philosophy to explain what today is and what we are today, but without breast-beating drama and theatricality and maintaining that this moment is the greatest damnation or daybreak of the rising sun. No, it is a day like every other, or much more, a day which is never like another.

What is today? What are we today, who live today as the central present of our lives, as that which makes our lives present to us? And how can we recognize–as a way of resisting a set of narratives that continue to tell us that this today is a day unlike any before, that we face a set of challenges that have changed “everything”–the ordinariness of today, including the ordinariness of its fear, its war, and its violence?

Whether it’s Sept. 11 or the recent presidential election [remember readers–this was December 2004!], I think the danger of imagining today as the one time (the greatest damnation, the new world world order) is that it gets in the way of thinking productively about an actionable relation to the future. The thing that changes “everything” always comes to us from an apparent outside (Al Qaida, red-state America) and because of that threatens to leave us feeling helpless.

In the excitement of the reboot regular readers may have missed O Solovieva’s lovely post, “Stealing a Shell,” posted on the day that the site redesign happened and the old material got moved to the archive. I hereby direct you to it. 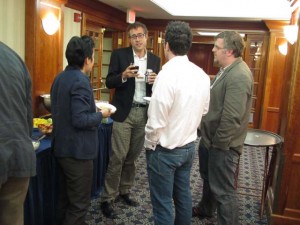 A Chinese-language report on the China After Comparison, Comparison After China workshop held two weeks ago at Penn State. Features photos of a number of PC regulars!

If you have ideas for links in the blogroll, please put them in comments to this post and I’ll add them in. Thanks.

Hi there, folks. Printculture is undergoing some major changes. Things should look better around here in the next few hours. Thanks for your patience. While you’re waiting, a broken version of the old site and its material is available.

If you had a previous Printculture login, you should be able to use it now to log in to the site.