Karl Barth was studying theology in Berlin in August 1914. He later recalled that

The actual end of the 19th century as the ‘good old days’ came for theology as for everything else with the fateful year of 1914.  … One day in early August 1914 stands out in my personal memory as a black day. Ninety-three German intellectuals impressed public opinion by their proclamation in support of the war-policy of Wilhelm II and his counsellors. Among these intellectuals I discovered to my horror almost all of my theological teachers whom I had greatly venerated. In despair over what this indicated about the signs of the time I suddenly realized that I could not any longer follow either their ethics and dogmatics or their understanding of the Bible and of history. (Barth, “Evangelical Theology in the Nineteenth Century,” The Humanity of God, p. 14)

The “Manifesto of the Ninety-Three” was probably copied from press releases of the propaganda department. It strikes the usual notes of hypocritical humanism: no German soldier ever committed an atrocity, it was “with aching hearts [that they] were obliged to fire a part of the town [of Louvain], as punishment,” the “wild Russian hordes” are the real danger to civilization, and so forth. Anything bad you might have heard about the German armies is just a fantasy of the perfidious British and French propaganda units. Bits of it are still being recycled today, wherever the bullets fly and after-action press conferences are held.

Here is the university library of Louvain, before and after the passage of the troops: 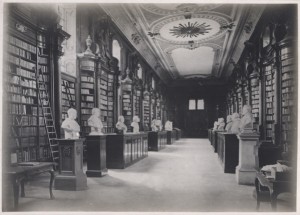 The main author of the “Manifesto of the Ninety-Three” (published apparently in October, not August 1914) was Adolf von Harnack, the historian of early Christian dogma, first president of the Kaiser-Wilhelm Gesellschaft (precursor of modern research institutions), etc., etc. Now a German professor of the nineteenth century had to be one of the proudest individuals on the face of the earth. His wife made him coffee; his adoring students poured him tea and copied down his every remark; he was the lord and master of his seminar room; he wrote books of never less than 1000 pages in order to confute his enemies; he went about in a silk hat and was addressed as “Herr Doktor Professor” or, if he had an administrative appointment, as “Eminenz.” If one was Harnack, one made a special point of insisting that no institution, no Church or State, could prevail against the demands of the individual conscience (see Das Wesen des Christentums [1902], pp. 171-172). Here is Harnack at the dedication of the Kaiser-Wilhelm Gesellschaft in 1911, walking on the left side of the Kaiser, in his silk hat: 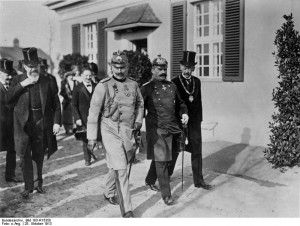 A proud man, a fine man, a much respected man, but not, in this instance, a very courageous or independent man. Rather, he assumed that the wind was at his back and that everybody thought the way the General Staff thought.

So before signing a petition that all your friends are signing, pause to think about Adolf von Harnack. And about Karl Barth, who went back home and tried to live out his personal reading of the Gospels by joining a workers’ cooperative. (Lucky man, he had a Switzerland to go home to.) 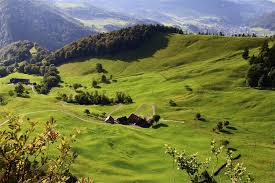