From the second year of graduate school until about five years after I left, I worked for my university’s bookstore. I did a variety of things, ranging from heaving medical textbooks onto the shelves for $6.15 an hour to working as the “Internet Projects Manager,” which basically meant that I was a one-man web development shop in direct competition with Amazon.

It was a wonderful place, with visionary people. We had a classical music CD department, an anime department, and about 100,000 books on the shelves in academic and non-academic subjects. We had an ongoing reading series with authors from our MFA program, like Maile Meloy, Glen David Gold, Aimee Bender, and Michael Chabon. My bosses turned me loose on web technology a couple of months after the final bits were dry on the first web browser, NCSA Mosaic. We were one of the first bookstores to try e-commerce, and my bosses and I wound up on the cover of the June, 1996 cover of American Bookseller and in the LA Times.

Amazon put an end to our nascent, at times Rube-Goldberg-like efforts, and I struggled with the limitations of being one person trying to fight an e-commerce battle I had no chance of winning. One boss left in frustration, then I left, and the second boss retired a couple of years after that.

After that, the focus of the store shifted away from strategy and towards operations. By the time a few years had passed, without anyone at the store completely realizing how quickly it was happening, Amazon had eaten our store’s lunch. Together with its competitors, it had peeled off too many of our textbook customers. It was because of a monopoly on textbooks and their profits that we’d been able to do all this great stuff; without that monopoly, the number of students coming through our doors started to dwindle and our margins started to thin.

The end of the store soon followed, brought from on high by administrators who were frustrated that the store was no longer a cash cow. There was a sham of “consultation” with the University community — my letters were met with form letters — but management consultants were brought in, and they made the brutal suggestions that you would expect. My friends there who cared about books and literary values were forced out, along with all the employees over 50. The store has now been emptied of books. It is now selling textbooks, plush animals, and sweatshirts. It has been, in a word, deconsecrated; the word “Bookstore” has been taken out of the name.

So here is a photograph of the shelves that used to hold literary criticism and philosophy, now filled with plush anteater mascots. Look upon it and despair. 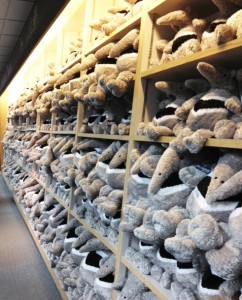 Shelves where the books used to be: UCI Bookstore, now “The Hill.”

NOTE: I’ve published a follow-up piece to this article at https://printculture.com/the-late-bookstore/.

One thought on “My Bookstore”