I have a copy of the 1911 Encyclopedia Britannica. That’s not so special; lots of people do. Most everyone does, in a certain sense, now that it’s available in digital form (though done with bad OCR). The limp leather volumes from Cambridge University Press are nice, as is the thick volume of Index, and the type is crisp on the thin bible paper. This was the last Britannica to be written, article by article, by specialists and not by committees. But what I particularly prize is the Supplemental Volumes from 1921. Three thick volumes inventorying all the great things that had come about in the world between 1911 and 1920. Aerial Warfare. Chemical Warfare. Somme, Battle of the. Tanks. Verdun. And so on. Hard to believe in progress after you’ve flipped through those three volumes. Welcome to the twentieth century.

Born 46 years after the shot was fired in Sarajevo, I learned about it fifty-odd years after the event, I guess. The channel that opened my historical awareness was the song “Snoopy vs. the Red Baron,” released in 1966. The imaginative beagle took to the skies in his Sopwith Camel (I didn’t know what one was, but the name stuck) to duel with Baron von Richthofen’s red Fokker triplane. A red triplane, now there was a striking and improbable flying machine! I remember getting my father to buy me a plastic model kit of the Red Baron’s Fokker and taking out books from the library about the aces of the air. This was definitely a more heroic, aristocratic and archaic vision of the conflict than I would have had if Charles Schultz had decided to make Snoopy fantasize about long watches in the trenches, or machine-gun nests along the Chemin des Dames. It was a short step from there to the opening scenes of La Grande Illusion; pity I had to wait until college to see that. 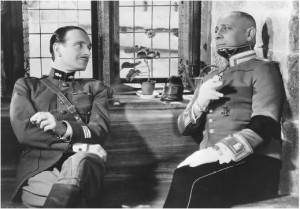 In between, of course, Hemingway. It strikes me as strange that for a kid growing up in the 1960s, the First World War had more imaginative presence than the more recent Second. As for the war itself, it had a more comprehensively structured and tragic story going for it. A tiny act of terrorism perpetrated in a sub-prefectural town that merits two paragraphs (but an independent entry! spelt Serajevo) in the 1991 EB; an ethnic grievance far from the concerns of the major Powers; saber-rattling and appeals to honor; a pretext for self-reinforcing volleys of escalation and refusal to negotiate; deluded calculations (“we’ll be home by Christmas”); all the technology that could be thrown at a problem that was not in essence technical; unimaginable wastage resulting only in the end of the kind of world that had led to the initial revolver shot. The story matched the handbook definitions of tragedy in that the very thing that had kept the peace and been the basis of European political order for the preceding hundred years, the balance of powers and system of interlocking alliances, was exactly what brought it all down.  I suppose Gavrilo Princip got what he wanted, the dismantling of the eastern provinces of the Austro-Hungarian Empire, but at what a cost. 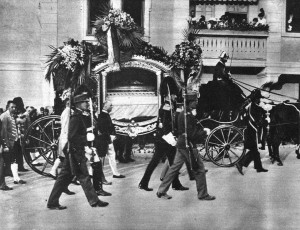 (Thanks to Jason Escalante for this last photo.)

One thought on “Do You Remember Where You Were When You Learned Archduke Franz Ferdinand Had Been Shot?”