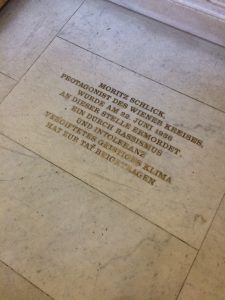 On the main marble staircase of the University of Vienna, brass letters set into the floor mark the event. “On 22 June 1936 Moritz Schlick, a leading member of the Vienna Circle, was murdered on this spot. An intellectual climate poisoned by racism and intolerance contributed to the act.”

I had always assumed that Schlick’s assassin was inspired by race hatred. It turns out, though, that the only Jewish thing about Schlick was the philosophical case he made for Einstein’s relativity theory (a piece of “non-Aryan science” according to the Nazi thought leaders). His murderer, a former grad student with a grudge who blamed Schlick for his own failures in love and career, had been stalking him for years. Stalkers will stalk, malingerers will malinger. But it was 1936 in Vienna. The murderer made no attempt to run away. Once arrested, he had his fan club. He claimed to have done the deed to purify the nation of a quasi-Judaic philosophical “decadent.” And with the benefit of a pliant jury and a bit of an insanity defense, he was out of jail within two years.

Schlick’s murder set other members of the Vienna Circle on their path out of Austria. Carnap came to Chicago, and another story began.

A climate of hatred and violence: it not only precipitates murder, but retrospectively justifies it. The university is right to call this to the attention of everyone going up and down the stair.