A friend from Beijing brought me a bottle of rice wine with a pagoda on the label: 塔牌紹興酒, or “Pagoda Brand Shaoxing Wine.” It reminded me of an earlier incarnation of that apparently famous brand, made in Taiwan: different bottle shape, different label, almost the same name, but complemented with an English transliteration: TART-PIE. There’s a whole theory of language in that designation.

The word for “pagoda” or “tower” is, in fact, borrowed in Chinese as a transliteration of “tart”: you can buy shuiguo ta, or fruit “pagodas,” in Taiwan. Before anyone gets excited, let me point out that they’re one-storey affairs. Knowledgeable consumers are aware that the “ta” is there as a transliteration, not as a unit of meaning. “Pie” is sometimes represented as pai (meaning “send,” fourth tone, 派). But every unit of sound, every syllable, in Chinese writing carries some kind of meaning. The translator of the Taiwanese rice wine label must have assumed that English works in the same way. If you wanted to translate the Pagoda Brand name, then, you would have to find words in English that had meanings and were phonetically similar, thus Tart-Pie. The absence of any relation between the wine and tarts and pies initiates the English reader into the way Chinese pastry buyers deal with “sendings” and “pagodas”: they just step over the misunderstanding and enjoy a fully semantic though partly nonsensical universe. 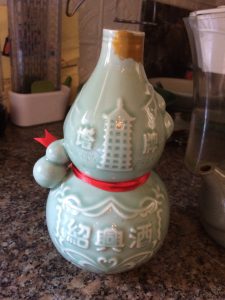