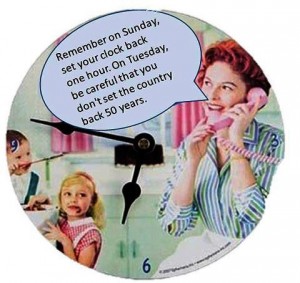 The quippy jpeg above has been circulating on Facebook and seems apropos. Our collective quadrennial alienation from one another can, I think, be safely judged to have reached new heights this year; certainly, I have never seen 4 year-olds driven to tears by overexposure to the political process before.

Some obvious contributing causes: the Citizens United decision, which has thrown open the floodgates to unlimited untraceable political donations and Super-PACs; the ensuing carpet-bombing of television, radio, and home telephones in swing and near-swing (swung?) states, including bonus collateral damage in cross-border markets; Fox News and the triumph of hyperpartisan right-wing media; increasing polarization of Congress; and the continuing agonies of the worst economic contraction in 70 years, and median income that has been stagnant for a decade, along with the resulting widespread shame, anger, and despair. 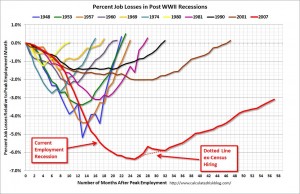 Employment recovery for all post-WWII recessions (2008 “great recession” in red), from Calculated Risk

For me personally, however, the single most alienating aspect of the election has been living with the knowledge that a persistent, and very determined, 48% to 50% of my fellow citizens want to engage in a repeat trial of the 8-year experiment in Republican economic and foreign policy orthodoxy that we completed less than four years ago.

After all, I understand that a minority of the population is on board with the scientific approach to economic policy taught in our Econ 101 classrooms. And the liberal approach to foreign policy has been in eclipse my entire lifetime. Moreover, public policy debates typically suffer from the severe handicap that the outcome of the counterhistorical scenario – the parallel universe where the alternative policy was put in place – can never be known. 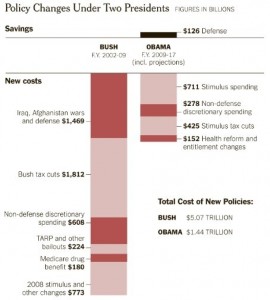 Causes of increasing Federal debt under Bush vs. Obama, from Ezra Klein

But not in this case! In this election, we have as close to a controlled trial as any single nation is likely  to achieve in this world. 12 years ago we elected (well, sort of) a President whose policy prescriptions were identical in every way to the policies Romney proposes to implement in his administration – from taxes, healthcare, energy policy, and business deregulation to go-it-alone military adventurism abroad. Those policies were implemented, with drastic and obvious negative effects on almost every aspect of life in the United States. As a result of those policies, one can fairly say, we elected our current President four years ago. And now, having seen the alternative approach in action for four years, half of our citizens nonetheless wish to repeat the prior experiment.

No matter what the election results on Tuesday – and as far as that goes, in Nate I trust – I do not think I will ever get over this feeling of disconnect from our fellow citizens who feel either that the Bush policies were superior (in what way?), or that their reincarnation under Romney would lead to different results. In its own way, voting for Romney represents a rejection of the scientific thought process – a discipline I have devoted my life to – as complete and total as  the rants of the most extreme religious radicals.

Perhaps I should be less shocked. But let us hope that this time the rational way prevails.

One thought on “On Repeating the Experiment”