One of my relatives is a reliable supplier of Tea Party propaganda. It’s useful to know what people think the hot issues of the day are, and how we as a nation should be responding to them. This morning I received the following item from my relative, forwarded from Soldier of Fortune magazine: 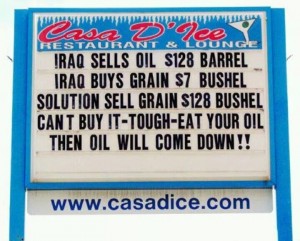 So it appears that some self-styled conservatives don’t know the first thing about how free markets work– and they are supposed to be the ones pushing the idea of free markets.

You can certainly ask $128 a bushel for grain, but nobody will buy it. When oil from Iraq is loaded onto a tanker, it’s just oil, and goes for whatever the going price is, set by the futures and commodities traders worldwide in function of a lot of considerations, mainly supply and demand but also the likelihood of interruptions in delivery by war or weather. The desire to hurt Iraqis is not, thankfully, a big consideration for the futures trader.

And why hurt Iraq? Why the vengefulness? Are we at war with Iraq? The people who get excited about this must have forgotten that the government of Iraq, such as it is, was put in place by us Americans under the leadership of George W. Bush, and from the look of current events, they need all the help they can get. They aren’t supplying us with much oil anyway, and I bet if you asked Iraqis, they would be more than happy to win more oil revenue if only the production areas were not constantly under attack by the fundamentalist militias most of the governments of the world would rather see go away. (Those militias, by the way, owe their rise to our destruction of the existing order in Iraq, such as it was, without putting anything in its place.)

I looked at a few of the comments attached to the posting. You really do have to be living in an alternate reality in order to get the dopamine rush that 6,300 Facebookers seem to have got from this picture. One in which the US has the largest oil reserves on earth (we occupy, according to Wikipedia, a moderate #14 spot) and it is just greedy “liberals” who are preventing honest, hard-working Americans from sucking that oil out of the ground, for the greater glory of USA! USA! Another favorite theme is that the liberals are preventing the extraction of oil by establishing gasoline taxes. But wouldn’t a government that received tax revenue from a certain commodity be interested in ensuring a steady supply of that revenue? Many levels of government get a cut when I go round the corner for a little lick of liquor. They are interested in cashing in on the sin tax, and also in keeping the price of liquor high enough that people won’t be smashed all the time. Perhaps the bar owner in Pennsylvania who posted this sign feels differently. But as much as I like my booze, I can live with not getting everything I want all the time.

One thought on “Low-Information. High-Indignation.”