Remember that old Bullwinkle episode where Boris and Natasha dosed America’s finest brains with a secret gas that made them stupid? Goof gas has been discovered; it’s the word “terrorism.” Effective in 94% of people (personal observation).

The sordid trick of creating a special, sacred, untouchable category of people whose motives are supposed to be irrational and unknowable– or let’s say “evil,” for brevity’s sake– is having its predictable effects. The 19-year-old second suspect in the Boston Marathon bombing has been labeled a Terrorist, and gray-haired elder statesmen are baying to have him thrown into Guantanamo; people I supposedly am friendly with, or friend-of-a-friendly with (by the standards of Facebook) are calling for him to be tortured (as if that would serve any purpose of investigation or law). And, most notoriously, a city of 600,000 people was on lockdown for 48 hours and thousands of police were swarming around as if he were Godzilla come back from the bottom of the sea.

If he and his brother had killed a policeman, stolen a car at gunpoint, exchanged fire with cops, and somehow set off explosives that killed three and maimed 120, while robbing a bank, we would be talking about them as vicious criminals, but we would be secure in the knowledge that we have courts and prisons designed to handle such cases, and handle them (let’s hope) dispassionately. But robbing a bank is, I guess, normal, and this other thing is somehow out of the sphere of humanity. But that’s absurd. People commit horrendous acts of violence and harm strangers all the time in their “pursuit of happiness.” Sometimes there’s a political or religious element to the wickedness, but not always. What they do can be described within the vocabulary of the police blotter and the criminal law, judges can hear testimony for and against them, they can have their day in court and their many days in prison, if found guilty. This is everyday life in a society that has laws.

No need to get all terroristic about terrorism. Read the poor SOB his Miranda rights, for heaven’s sake. Question him first, if there’s a likelihood that he has stashed further bombs that might be set to explode and hurt people. Question him about that. But don’t put him outside the reach of the law, deny him access to a lawyer or the right to remain silent, just to punish him. That actually wouldn’t punish him; it would reward him, it would make him from an American citizen (admittedly, not a very nice one) into a superman. Or Godzilla. And as far as a rational eye can see, he isn’t.

Jesse James was armed and dangerous. He was not a supernatural category. He was not evil incarnate. He was not a threat to all of our very existences. If you think little Dzokhar is, that’s the Goof Gas doing its work. 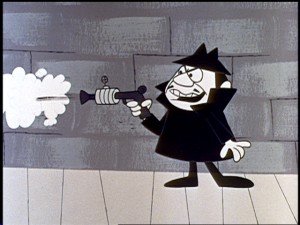 Update: on April 22, the judge notified the surviving suspect of the charges being brought against him. Though indigent, he was informed of his right to legal representation. So somebody out there is reading Printculture. Good.

2 thoughts on “Goof Gas; Or, Read Him His Rights”