The Russian media these days are full of denunciations of European modernity. “Western civilization puts on the same level families with many children and same-sex partnerships, faith in God and faith in Satan. Excesses of political correctness have reached such a level that one seriously discusses the registration of parties whose goal is propagating pedophilia. People in many European countries are ashamed to talk about their religious beliefs in public” (Vladimir Putin, trans. OBC).

Funny thing that, because a lot of the most brilliant and challenging modernity came out of Russia. Malevich’s famous installation in the Constructivist exhibit of 1915 was just denounced by one Sergei Andriaka, art director of the Moscow School of Watercolor, for blasphemously putting the Suprematist black square in the place where, in a conventional Russian home, an icon would be installed. 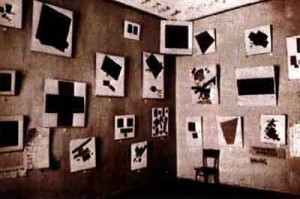 Blasphemy charges! Fear of gender studies! The War on Watercolor! It’s as if Fox News had got control of a state and its media and was promulgating cultural policy.