Frances’s parents (her mother and stepfather, to be precise) and my parents were more or less best friends during a period that was probably among the best of their lives–I’m guessing, of course, because adults are always mysterious to children. I’d known Frances since kindergarten. By age 10 or 12 (we were only a few months apart in age) she had long russet hair, long skinny legs, a long freckled nose, a humorous voice, and excellent swimming style. My swimming style was more an aquatic rampage. Opportunities for comparison abounded, for we were at their house pretty much every weekend, for the Saturday and sometimes for the Sunday, since they had a swimming pool. Frances and I had younger siblings whom we majestically ignored. The grownups lay on chaises longues and drank long drinks; we chased and dunked each other in the pool. 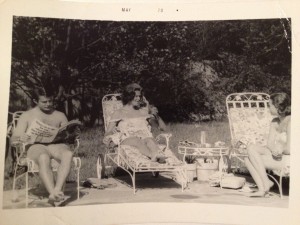 The years I’m thinking of were the best years, I suppose, of the older people’s lives. Frances’s stepfather was getting his business going (luxury retail), after years of working for other people and building up connections, as an out-of-towner married to a local gentry matron. My father was writing his piano concerto (Number One, if you looked at the score; alas, there was never a Two) and was soon going to release two albums with Warner Brothers: operatic, symphonic rock music with overdone lyrics mainly about nostalgia. These two couples understood each other’s humor.

Frances’s stepfather, like my father, was a newcomer to Nashville; her mother, like my mother, was a native; our grandmothers were close friends; and both couples were known for being the antithesis of boring. I remember them with cigarettes always in one hand, drinks always in the other. Something was always about to happen, and it was usually fun. Our parents went on trips to places like Mexico and Eleuthera together. At that time, you didn’t think of taking the kids along, so I have no pictures of those journeys, only second-hand stories of the time my father bought a full-sized Oaxacan harp and insisted on carrying it onto the plane, the epic pub crawl that ended with my father playing a piano in the back of a truck all over Kingston, Jamaica, or the arguments they had with sidewalk merchants about the authenticity and provenance of their Toltec figurines. One year the Christmas present my parents received was a gaudy trophy inscribed “To Tupper and Lola, for Achievement in Cuteness.” Their present to Frances’s parents was a statuette of a portly woman in a polka-dot dress who had just clean-and-jerked a man in top hat and tails, presumably her husband, and held him over her head in readiness to throw him over some fence. These were extremely cool grownups to know, and I think the rest of my life has been a grouchy attempt to forestall recognition of the fact that I can never be more than four-tenths as cool as they were. 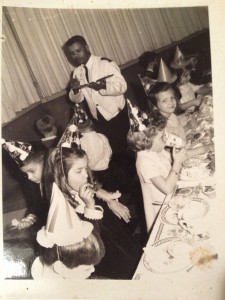 (My birthday party, 1965. Frances is the girl whose face is most clearly visible at top right;
my face is directed toward the ice cream and cake, bottom left.)

At poolside my father had control of the playlist. He was too modest to put on his own records, but I remember a lot of the records he had in mind as he recorded his own tracks in those epic years of 1968, 69, 70, 71: “Someone left a cake out in the rain,” “Here’s to you, Mrs. Robinson,” “You put your eyes in your pocket and your nose to the ground”– and don’t forget the whole White Album, with special credits to Rocky Raccoon. We dove, swam, skirmished, and the music was always there like an atmosphere. I think Frances’s parents were the ideal audience for the songs my father was trying to write. Though not professionally involved in music, they would have picked up on the Cole Porterish bits of wit, acknowledged the Orbisonian plangency, and not seen anything wrong with the epic orchestration, for they were living in Technicolor and Sensurround, and why shouldn’t everyone?

Frances had cousins and friends whom I considered glamorous and well-established in the world we knew, including one cousin, already clever and observant, who went on to write about the quiddities and oddities of the Southern country-club set. This cousin shares with me a memory of the day the astronauts went out walking on the surface of the moon. My father had already decided for us that television was a scam, so we had to watch TV programs at other people’s houses. Those moon adventures were another pretext to go over to Frances’s house. My father put the television on top of the piano, cut out the sound, and played a walloping, wobbly silent-movie accompaniment to the goofy walk of the astronauts exploring the lunar soil. It was perfect. If you ever needed a single scene to capture the quiddity of F. T. Saussy, III, this would be it.

Life went on. People moved out, families reconfigured, people went away to school. I kept in touch with Frances, and we both made lives for ourselves outside of Nashville, where for slightly different reasons (but similar ones) we never felt completely accepted. (Nashville accepts you completely or not at all.) I saw her once in Nashville while I was studying in Paris. She had some complaint about the international-studies curriculum of the college where she was, and I said she should transfer to Sciences-Po, even sent her some leaflets when I got back, but nothing came of it. (Alas! I would later add.) She studied and later worked in Chicago, and whenever academic stuff, conferences, talks and the like, brought me to Chicago I would give her a call, and usually we would have a drink or dinner and generally hang out. She was a splendid aunt-like figure to a pair of beautiful children who had lost their mother. One Christmas we played with them in a high-ceilinged apartment in Chicago’s North Side. As far as I could see, there was nothing but friendship going on between her and the children’s father. Another “Alas!” because Frances would have been the stepmother to redeem the reputation of all stepmothers and force the insertion of an extra explanatory page in all future editions of the Grimms’ Fairy Tales. (“Before Frances, it was widely believed that stepmothers were evil…”)

Frances contributed indirectly, but wittingly, to my coming to Chicago. It turned out that our circles, the academic and the social, intersected. She helped us out in all kinds of ways: advised me against unwise real-estate transactions I was about to plunge into, helped us find our house, told us about things to do with kids. In the autumn after we moved here, we saw her only two or three times but meant to do more. She seemed slowed-down, like a person who’s skipped a night’s sleep. The wit was there but you had to wait an extra second or two to hear it. I later heard that she’d been taking an antidepressant (possibly responsible for the slowing, unless the depression was). But from what we knew about her life, everything seemed to be going right. A tall, somewhat weather-beaten sculptor was firmly attached to her, and I applauded his good taste.

The day after Christmas last year, we came by her apartment and she told us about a New Year’s plan she had hatched, to spend the beginning of 2012 in Venice. This sounded beautiful, wild, and the sort of thing that only single or childless people could hop on a plane and do. I felt momentary envy, not having been back to Venice since 1982 or so. Since Olga and I had been talking about Thomas Mann earlier in the day, I attempted to crack wise, picking up a copy of Death in Venice from the hall table and saying “Now, I don’t want to spoil anything, but, you know, it’s not a murder mystery.”

A few days later we got a phone call from the sculptor: she had been found dead in her Venice hotel room. No sign of foul play, but the inquest would take weeks. Meanwhile the Nashville relatives had decided that the less said about it, the better.

I respect, of course, the relatives’ wish to mourn in peace and quiet. But I want to mark the moments wherein Frances’s and my lives coincided on the basis of our or our parents’ sense of wildness, humor, friendship, and the kinds of loyalty and affinity that don’t boil down to a picket fence, a beneficiary designation on a 401-k, a pact of silence, or “settling down” in whatever form.

And so, a year having passed, I say farewell to this childhood friend who was one of the few people who could reawaken in her memory the milieu of those summer afternoons in and out of the pool, with Richard Harris bellowing on the stereo about his cake in the rain and the grownups being “chic and divine” with tall glasses in their hands, discussing something we didn’t know enough to care about.

One thought on “Across the Year Line”