The demonstrations against “marriage for all” have shown a surprising side of French democracy. If you’d asked me three months ago, I would have said that France was immune to Tea Party stratagems. They have worked out a social order with ample (never adequate, because there’s no such thing as adequate) provision of life’s essentials, and a political system with an imperfect (like all of them) representation of a wide variety of interests through four or five major political parties, whose bases and alliances shift with time but who have a lot of consensus among them; and they recently threw out a plutocratic president suspected of illegal campaign financing, among other things, in favor of a bland but decent technocrat from the squishy Left. It didn’t seem to me that there were the ingredients for intense polarization of the electorate by politicians who had recently lost a vote and wanted to get even. The ranters and extremists were focused on immigration, the reliable hot-button issue in those prosperous countries that have relied for two generations on cheap labor from nearby poorer countries.

But “Mama and Papa” have done the job, it seems.

You don’t need to read very deeply in Freud and Lacan to see that the social imaginary is going to be deeply affected by any reshaping of the family constellation. Mama and Papa are responsible for the continuation of humankind; they are in charge of the bottle, the toilet, the first steps, the handing out of cookies and discipline. Birth control altered the logic of procreation. The change from an authoritative to a friendship model of parenting over the last 50 years or so jolted the doxa too, with echoes in schools, workplaces, hospitals, streets and other places where humans related to other humans hierarchically or non-hierarchically. And the vicissitudes of employment (or not), marriage or not, divorce or not, remarriage or not, leave the child of 2013 with many options when it comes time to take crayon in hand and draw the classic house with parents, child(ren), dog or cat, and smoke curling out of the chimney. One would think that given such shifts in the family pattern, “Mama and Mommy” or “Papa and Daddy” could be accommodated. It’s happened elsewhere. Some predicted the worst, and then the mere dailiness of preparing school lunches and looking for lost mittens in the morning took over. 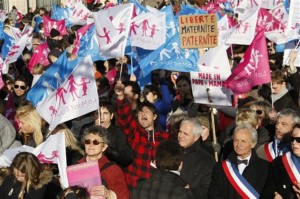 But lots of people in France took to the streets to protest that “Papa-Maman” were the best way, the only way to go. This surprised me. I knew of course that France has historically had a lot of “familles nombreuses,” and “la famille” is a big deal; my friends there tend to spend their vacations with their parents, grandparents, sisters, brothers, cousins, children, etc. But the live-and-let-live spirit is strong too, as it has to be in families where there are uncles who have crazy opinions about this and that, kids who get along better with other relatives than with their parents, the complications of second spouses, and so on. On the basis of my dealings with French people over the years, I would have expected that most folks would see the difference between a right and a privilege, and have been ready to see a privilege transformed into a right by becoming available to a bigger set of people.

I haven’t been in France since the big demonstrations against the “Mariage pour tous” law got underway a few months ago, so I don’t know if my estimations are off. The size and persistence of the crowds surprised me. And today’s Le Monde observes that some politicians on the right– from Sarkozy’s party, currently out of power and eager to seize any chance to get back in the spotlight and on the attack– are trying to capture the indignation about “marriage for all” for their electoral benefit. Will this result in a Tea Party à la française, an angry crowd mobilized for one purpose who will sign onto a package deal of full-spectrum regressive legislation?

The rules for Tea Partying are easily stated. Find some emotionally gripping but inconsequential issue (or a group of unrelated issues). Climb on the housetops and shout that this is the apocalypse, that the existential crisis is upon us. Once for every man and nation… As you do so, fan the paranoia and suspicion. Make sure that all overtures from the other side will be rejected by depicting those people as hypocrites (elitist, lazy, sinful, unpatriotic) with whom cooperation is doomed. Pull hard on the levers of fear and envy. Denounce the democratically elected leader as both weak and a tyrant, omnipotently malign and incompetent, in defiance of ordinary logic. (No need to cite chapter and verse for the US version, but my compatriots may be intrigued to learn that the sore losers of the argument about same-sex marriage have sworn to resist the “socialist dictatorship” of Hollande.) Dig into the vocabulary of the Hitler epoch for your account of the crisis. Get in some thugs. When all else fails, call in the halal turkeys.