One of the many reasons for unplugging from Facebook is the spectacle of many of my relatives avidly reposting falsehoods generated by Russian, Serbian and Montenegrin troll farms. They don’t seem to have the wit or energy to write up their own lies, but just push “Share” on items posted by nonexistent users like “jamesjo76415286,” “Survive Our Collapse,” “Sunday Gunday,” “@GenJohnKelly” (an acknowledged parody account) and “Kim Daskam.” Here’s how you relativize treason, by treating as facts a lie in multiple layers by the current occupant of the White House: 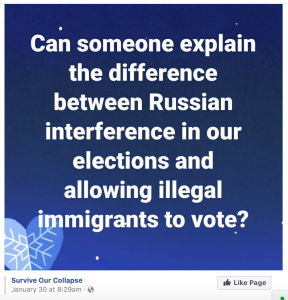 And here is how you make gun control sound like a bad idea: it “didn’t work,” supposedly, in the towns where a lot of black folks happen to live: 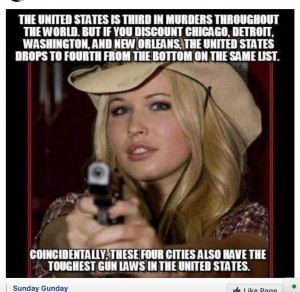 But an Ivanka Trump lookalike in a cowboy hat? Hell, give that girl a an AK-47 with a bump (heh heh) stock.

From an alternate universe in which numbers count for something, here’s a handy tally comparing gun laws and per-capita gun deaths. (Safehome.org.) 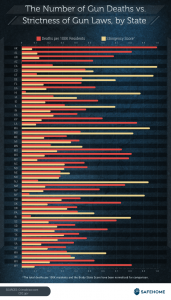 And here’s the international ranking: 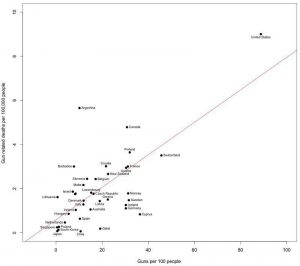 I’ve discovered that sending a friendly message suggesting that these relatives might like to check Snopes before posting doesn’t help– for them, Snopes is another liberal conspiracy, and there is no shame in being found wrong. As one cousin wrote to me, “You still believe Snopes? We don’t know anything.” If you don’t know anything, you aren’t responsible for anything, ain’t that convenient. So: The kid who shot 17 students at his former high school the other day did so, if you listen to some of my relatives, because Hillary bought him a gun and sent him out to use it, or because the FBI somehow set him up. There’s no abyss of stupidity too profound to be shared by these over-sharers, who somehow think they are saving the Republic by doing so. Team Trump over Team Truth!

For example, a few days after the Parkland massacre, one of my relatives had this to say (or rather, repost): 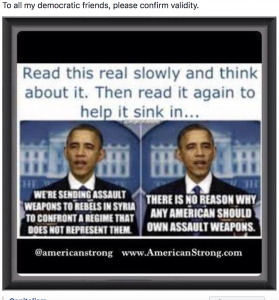 So: the real issue, apparently, is not taking action to protect human lives. The important thing to do is nitpick about something Obama said, push the NRA’s long-discredited interpretation of the Second Amendment (“a well-regulated militia” was never about citizens’ right to resist their government), and cheer for upcoming civil war on our own territory. If a kid murdered people with an assault weapon, it was (a) somehow Obama’s fault, and (b) justified in the larger scheme of things, because if you disapprove of mass murder, you must have been brainwashed that way by Soros and the globalists. That’s what you might call some deep thinking from the world of suburban Southern white folks.

Another analysis shows you how my kinfolk work the moral calculus. 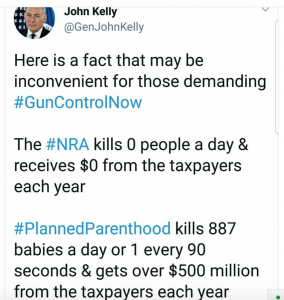